In the early stage, you experience problems you can’t immediately put your finger on. They can go away again, remain for a long time, or get worse and lead towards psychosis. Anything might happen, so problems in this stage are no reason to panic or take drastic measures.

During the early stage, there are subtle changes in your behaviour. For instance, you stay in your room more often, miss appointments, act a little strange or say illogical things. The people around you often pick up on this before you do. It is important to take signals from those around you seriously and talk about your early symptoms with people you trust.

Some typical examples of early symptoms:

Please note that these signs are not specific or predictive: most adolescents have periods with many of these signs. Therefore, those who have never had a psychosis before, will not recognise these symptoms in this early stage. The typical behaviour can only be identified as ‘early psychosis’ afterwards, with the wisdom of hindsight. After learning that these are ‘warning signs’, you can then recognise these as signals that you might be going off track again. That is how you can learn to prevent another psychotic episode.

When these signals that you might be going off track appear, this can be prevented if you and the people around you respond in the right way. In this stage, you can still prevent an oncoming psychosis. If you know yourself well and know what signs to look for. When you are able to ask for help. If you succeed in taking enough control of your life.

As we said before, having early symptoms does not mean you are becoming psychotic. Most people will have a few at some stage. Still, it is good to take these signals seriously and adjust course in everyday life in a number of ways. Taking control of your life can mean:

Symptoms can differ from person to person

Early symptoms do not always indicate an oncoming psychosis. They are quite common, and most symptoms are also part of ‘regular’ anxiety, depression, or hypomania. During a hypomanic episode you are more upbeat than normal and full of energy. These symptoms can go away again, for instance after a couple of good night’s sleep. And as your anxiety or depression decreases, the chance of psychosis lowers as well. Afterwards it might feel as if you had some kind of mild depression. That is how most people experience mild psychotic symptoms. Mild symptoms can last for years without ever turning into a full psychosis with hallucinations, delusions and other symptoms.

From mild symptoms to psychosis

If early symptoms are getting worse, there is a risk of an actual psychosis. Usually a psychotic episode is triggered by some immediate cause that causes lots of stress, anxiety or other emotions. At such times, symptoms may suddenly get worse.

A young woman has just moved out of her parents’ home to live in a big city. At first, she went out a lot. But lately she’s feeling anxious and just stays alone in her room after work. She is also not sleeping as well as before and sometimes has strange thoughts. She thinks her flatmates do not like her and are trying to bribe the landlord to kick her out. At some level she still understands this is nonsense, but the strange idea just won’t go away. One night she hears a voice, like it came from another room. The next day, she decides to make an appointment with her GP, to talk about at least her sleep issues.

This fourth stage of living with psychosis vulnerability begins when the crisis has calmed down. You know your possible triggers and how to avoid them.

In this lecture, given at the Institute of Psychiatry in January 2021, Jim van Os give a broad overview over what we know about psychosis. 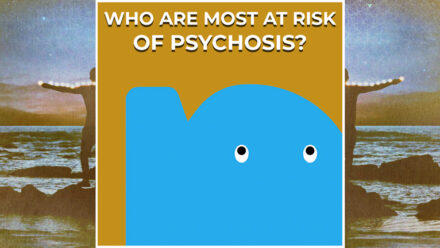 Especially young adults and teenagers are most at risk of psychosis and to show psychotic symptoms. People affected are most often between the ages 14–30.